ED succession planning - who needs it? We all do according to six Canadian and U.S. studies that predict a not-for-profit executive leadership transition rate over the next five to 10 years of 75% - 83%.

In Canada, the report from the Calgary Centre for Non-Profit Management by Boland & Associates, found that 82% of Canadian executive directors are expected to leave their current positions within five years. That's more than 132,020 organizations!

In 2003, "Cornerstone of Community" identified succession planning as one of the key concerns of the 13,000 Canadian not-for-profit organizations surveyed. And yet, most boards resist making plans to replace a chief staff officer. A chronic lack of human and financial resources available to not-for-profits necessitates the need for each to develop crises management skills, especially in the area of their greatest vulnerability, leadership succession.

A demographic time bomb will seriously affect the leadership of not-for-profit organizations in Canada over the next decade. More than half of current chief staff officers are over the age of 50 and the majority will reach retirement age by 2020. That's 80,500 Canadian leadership transitions by the year 2020!

In Canadian not-for-profit organizations, 10% of chief staff officers leave annually, a total of 16,100 transitions per year. As in the U.S., 66% of these leave voluntarily while 34% are terminated or forced out by their boards. Further to this, 33% of voluntary leavings are retirements - annually 3,507 leaders leave the sector along with their experience.

Simply put, we fear the unknown, deny the inevitable and hesitate to take action.

Do any of these barriers resonate with you or your organization? These are the most frequent reasons cited for delaying a board-led succession planning effort:

These are the most frequently cited fears of a chief staff officer's willingness to participate in succession planning activities:

1. Hiring a first CSO by an organization that has been previously led by a board of directors.

2. Replacing a CSO who is leaving immediately as the result of resignation, termination or death.

3. Replacing a CSO through an incremental and departure-defined transition, such as retirement.

4. Replacing a CSO with a long, successful history on the job, such as a founder.

5. Replacing a CSO for a temporary, short- or long-term absence brought on by an unexpected accident, injury or illness.

Succession plans include all the thinking, planning, preparations and activities that take place prior to the announcement of a definite departure date. These essentially are organization development activities.

Succession planning is a board-led effort to ensure continued effective performance of an organization over time by providing for leadership development and replacement.

Transition plans, by contrast, take place immediately following the announcement of a leader's departure date. The focus of this work centers on two human resource activities: recruiting and on-boarding.

Who is responsible for Succession Planning?

A short-term absence is one where the person will return to his or her position within one to three months - implement the Short-Term Plan.

A long-term absence is one where the person will return to his or her position within four to 12 months - implement the Long-Term Plan.

A permanent absence is one where the person is not returning to his or her position at all - implement the Temporary Long-Term Plan and begin the recruiting process.

What's in a CSO Succession Plan?

A succession plan is a series of documents that safeguard the organization and guide the actions of the board of directors by setting out policies and procedures that:

Usually when boards think about succession planning they think about one thing only - replacing the chief staff officer as quickly as possible. Given this mind-set boards usually make one of two mistakes in the search and selection process. Either they look for a carbon copy of the existing ED or they rewrite the job/position description to remedy any perceived deficiencies.

Unfortunately, neither option is likely to yield satisfactory, long-term results if the succession planning process begins only when the CSO leaves. This is because the planning process used is too shallow and fails to consider the long-term needs of the whole organization.

You can't really do anything about how old you are, whether or not you are the founding director or member of the reported attrition rate. The only thing you can do is to prepare yourself and your organization for the day when the CSO steps aside. Succession readiness requires a succession plan. 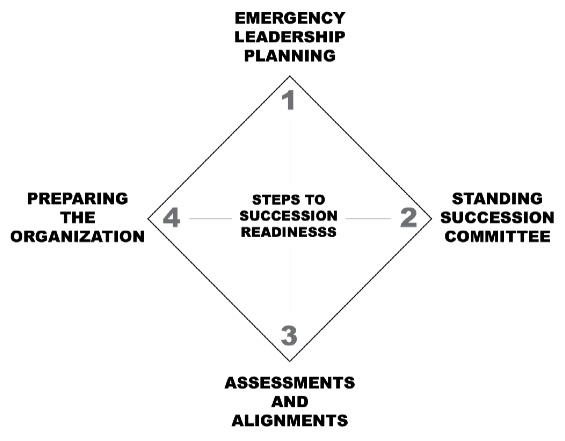 An Emergency Leadership Plan involves the preparation of two comprehensive and official plans for what to do in the first 72 hours of a chief staff officer's unexpected absence. There are two time frames to prepare for: short- and long-term absences from the organization. Whether the absence is planned or unplanned, voluntary or involuntary, immediate or scheduled, the response is the same - implement the appropriate Emergency Leadership Plan. Resignation, termination or death will trigger the immediate implementation of the temporary long-term plan while simultaneously starting the recruiting process laid out in the board policies. Prime responsibility for this rests with the board of directors in consultation with its chief staff officer. It includes:

This ongoing committee is established with the mandate to determine, lead, coordinate, monitor and report on the progress of succession planning activities within the organization. Prime responsibility for this rests with the board of directors. The committee's responsibilities include:

Getting ready for leadership change involves stocktaking through various organization assessments, strategic planning, analysis of the board, and creating alignment with the organization's policies and by-laws and operational procedures. Prime responsibility for this rests with the board of directors in consultation with the CSO in collaboration with agency staff, volunteers, clients and appropriate others.

Prime responsibility for this rests with the CSO in collaboration with the board of directors, key managers and other agency staff. These activities will build significant capacity within your organization.

These are the most common benefits for the board and organization in having a succession plan:

These benefits apply to the chief staff officer:

There will come a day when succession planning is a routine part of leadership training. Until that time, we must do what we can to make leadership succession less intimidating and more comprehensible and attractive. We must create a culture of succession planning. A not-for-profit that begins with this concept in mind leaves a legacy that will safeguard its future.

Linda Fairburn BIS MSOD, is a Canadian best selling author and an expert in the area of succession planning. Her company, Make Things Happen Limited, provides succession planning and leadership transition assistance for nonprofit and charitable corporations in Canada and the United States by solving problems through consulting and facilitation or by providing the tools and education for organizations to solve them themselves. She can be reached at 519-766-1400 or email her.